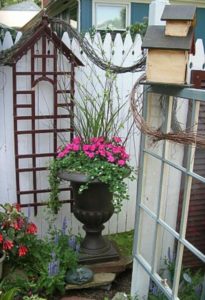 This week I am writing about a game I played with a young client who has quite severe OCD.  We are working on getting her ready for exposure treatment at a residential program by playing a role-playing game.

This game is based on “Passengers on the Bus” a great Acceptance and Commitment Therapy video by Joe Oliver, based on a metaphor by Russ Harris.   Let’s say that the client’s name is Amy and she has OCD about getting sick about contamination/germs in the environment.  Her compulsions are washing her hands too often and avoiding touching objects such as doorknobs.

First I asked why Amy is willing to work on her obsessions.   She values her friends and wants to get back to school to see them again (and incidentally, to get more education).  We wrote “friends” in big letters and “education” in small letters on a card and put it on a table at one end of the office.  I role played Amy “driving the bus” so I got up and started “driving” in that direction.

Now Amy, role playing OCD, stepped in.  “What if you get sick?”   “There are germs on doorknobs everywhere and you might die.” It’s too dangerous for you to go to school.” “You should just stay home and not take risks.” “If you touch any doorknobs you have to wash your hands or you will catch a disease.”

The first time around, I fought with “OCD”/Amy.  This is the part that is most fun.  Kids enjoy it when I yell, “Shut up OCD.   I won’t get sick.  It’s not dangerous to go to school.” We went back and forth “fighting” about whether “OCD” was “right”.  Meanwhile, I was not making progress towards my goal value because all my energy was spent fighting “OCD”,  not driving the bus.

The second time around, I gave in.  I said to “OCD”/Amy, “I think you’re right.  It’s just too risky to start touching knobs and if I do have to I should wash my hands really, really, thoroughly.  It’s too hard to take those risks.  I’m better off just staying at home.” I didn’t even start driving towards my goal values.

The third time around, I wouldn’t  engage with the content of what “OCD ” was saying.  I recognized that “she” was there. “I hear  you, OCD.  I know I can’t make you go away.  I am just going to go ahead and focus on getting to my goal. It’s OK, you can go on yelling at me.  Yell all you want.  I am driving this bus, and you are not in control of me. I can still drive to where I want to go.”

We sat down and talk about what worked best.  The first option was too tiring.  I didn’t get very far because I was fighting the content of what “OCD” said.   The second option stopped me from making any progress at all.   The third option let me get to my goal, as long as I allowed  “OCD”  to yell and shout at me, but kept my focus on where I wanted to go.

This role play game was  actually a gentle exposure in its own right, but it incorporated some fun too.  “Amy”  is making progress in learning about OCD, and working towards more difficult exposures she’ll do at the program. She asked to take home the paper with her goal values (friends and education) listed on it so she would remember why she was working on her OCD.

Adults can play this game too, and it can be used for any kind of negative thinking.