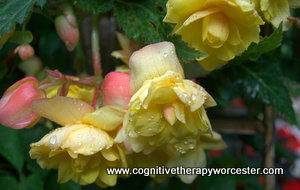 Recently, I’ve been reading a very interesting discussion on one of the professional listservs I’ve joined.  One writer cited the concept that the “core belief” of people with OCD is that they are “bad people”.  This is true of many clients, I believe, but not all.

We know that OCD attaches itself to areas of life which are particularly important to the client.  Years ago I saw a woman who was obsessed with reading each page of a text “properly” (ie. paying attention to every word, and also the page number).  As a result of being compulsive about this, she read very slowly.  She wanted to become an academic, but could only take one course at a time.

I wish that I could go back and ask my client  whether she would describe skimming  as a moral issue or not.    I actually believe that was not the problem.   The real issue was uncertainty about whether she had done the reading “completely”. This is a form of “just so” OCD.

“Just so” OCD is driven by an intense discomfort with situations that are not “ordered” correctly.  This is the OCD of popular culture.  “He’s OCD about having his drawers neat.”  It can indeed apply to physical neatness, order and symmetry – conventional norms.   But it can also create its own “rules”.

“Just so” OCD afflicted another of my clients, a man who could not eat meals until various household tasks were done in the “correct” order.  This affected his ability to eat regular meals, and caused him to gain weight, because he tended to eat one very large meal a day.   He felt really uncomfortable if he “disobeyed” his OCD-driven expectations about what he should do first.  The “rules” that these followed were created by his OCD.

Some people have to continue to perform a compulsion until they achieve the “just so” feeling that allows them to relax.  My client with the compulsive ordering of household tasks was like that.  Uncertainty briefly fades away.  Of course, the problem with this is that OCD will create more anxious thoughts – ‘Am I certain I cleaned that properly?’ – and then the compulsions will begin again. Once you begin having to vacuum the bedroom before you can eat, you may soon  have to clean the shower too.

The core belief that one is a “bad” person is certainly at the root of many kinds of intrusive thoughts. …..  ‘I had the thought I could push him in front of the train, so I must “really” want to do it’ ……..OCD clients get filled with horror at having the kind of “crazy” thought that research shows that everyone experiences.  The thought is seen as equivalent to the action, and the client can’t let go of the fear that having the thought means he or she is bad.  In fact it means that the client has a brain that easily gets “stuck” on thoughts about actions that break his or her moral code, whereas other people don’t notice them or shrug them off.

I don’t think the people with “just so” OCD necessarily see themselves as bad people.  However, OCD can take different forms at different times.  My client with the reading problem got into a relationship and became obsessed with the fear that she would hurt her boyfriend.

There is so much to learn about OCD!  The IOCDF also sponsors a series of talks for clients and providers at UMass Medical Center in Worcester, at McLean Hospital in Worcester, and in Northampton.  After the talk, there is a peer-led support group for adults with OCD, and another or family members.

www.ocdmassachusetts.org – Go to local resources, then Our Programs, then Lecture Series.